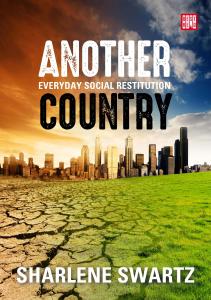 I have found it helpful to use two analogies when I speak about South Africa’s history of injustice and inequality. The first analogy is about a soccer game in which two teams are playing each other but the pitch is tilted at a massive angle with one team playing uphill, the other downhill. The side playing downhill is unfairly advantaged and is able to run up a massive score. At a certain point during the match, the advantaged team is forced to realise that the game is grossly unfair and that the playing field must be levelled before the game can continue. Some want the score to remain in place and think its fair merely to carry on playing now that the field is level. Others want to level the scores as well as the pitch and start again. Yet others want to stop the game until new rules are in place and time is given to let the team who has been playing uphill recover from their exhaustion, injuries and sense of hopelessness, before replaying the match. The other analogy is one of two children who live next door to each other – let’s call them Johnny and Jabu. Both have bicycles. One day Johnny steals Jabu’s bicycle. Jabu tries hard to get it back but can’t. Naturally they stop being friends. A year passes and they do not talk or even look at each other. But Johnny misses his friend and goes over to Jabu’s house one day and says, ‘Jabu, let’s be friends again’. Jabu agrees and so they shake hands and make up. They even have a gathering where Johnny explains to their friends and family the exact circumstances of the bicycle theft: Jabu relates how it made him feel, and Johnny admits to having done wrong – then they continue with their lives. A few months later Jabu says to Johnny, ‘Johnny, what about my bicycle?’ to which Johnny replies, ‘Look Jabu, this is about becoming friends again, not about bicycles’.

Of course, neither story captures all the complexities and nuances of South Africa’s history of slavery, colonialism, imperialism and Apartheid, or our transition to democracy in 1994. Neither do they address all our current issues of inequality, racial segregation, hate speech, and desire  to move on. What it does do however, is allow us to speak about what might be the fair thing to do in both these circumstances before relating it to our own South African story. It forces us to ask some uncomfortable questions: How does the past continue to have an effect on the present? Who has benefited from the past? Who has been hurt? What should be done about the past, about unearned benefits and undeserved pain? Have we done enough? Who should be doing more? When will we know when we’ve done enough? What will happen if we do nothing further?

What this book is about

This book confronts these questions. It is the culmination of my growing up as a White South African and slipping in and out of consciousness of what was really happening in this country of mine; of reading about, and grappling with, this hard word restitution as part of my academic research; and a nine-year-long  involvement with a small non-governmental organisation (NGO) called the Restitution Foundation. When I began writing this book in 2014, I thought it would just be about my ideas about restitution. I decided, however, that it would be enriched by inviting people to reflect with me on its meaning, the possibilities it holds and how restitution, more broadly defined,  might contribute to a better country as we head for the third decade of our fragile democracy. Along with three research assistants, I recruited a group of 60 South Africans from all walks of life, and from many parts of the country. They are young and old, rich and poor, men and women, Black, Coloured and White, professional and working class. The results were far beyond my expectations. These everyday South Africans offered stories about living through South Africa’s transition, some personally, others through their parents, and how they see our past and future. They talked about their experiences of the lingering damage of injustice: about Black patience, pain, anger and disbelief; White oblivion, blindness to privilege and shame. I believe I have captured a key moment in South Africa’s history in the year when ‘moving on’ was the dominant discourse, and just before the tipping point of the call in 2015 that #EverythingMustFall was reached.

Frequently, as I made the final edits, I found myself wondering whether this book is perhaps not too little too late; that the time for making restitution has in fact now passed; that what we need is something more radical, more coercive. But I don’t think so. Instead, I believe that a new conversation about a difficult concept holds the key to a new South Africa. This is especially true as people I interviewed spoke of a shared vision for South Africa’s future and what might happen if nothing further is done about our past (see Chapter 1 Restitution and a shared vision for South Africa’s future). There is a need  to articulate clearly why we are divided in our view of the past and our current realities, centring on different experiences of change, forgetfulness about the past, and perceptions of corruption (Chapter 2: Ways of seeing: Why we are divided about what is needed).

Historically and legally, the word ‘restitution’ has been defined as restoring matters to the state they were before an injustice occurred. This is difficult, often impossible to achieve. If, however, we take the word restitution to simply mean, pending a more thorough discussion, ‘making things right’ for wrongs previously committed, then restitution has numerous possibilities. I have four main thoughts that I believe will help us embark on a journey of restitution.

Injustice damages all of our humanity

The first is that injustice – whether slavery, colonialism, imperialism, Apartheid, ongoing inequality and greed ─ damages the humanity of all of us,  of victims and perpetrators. The damage has enduring effects over time and must be understood before we can simply move on with our lives, individually and corporately. In the South African context, Apartheid’s damage to the human spirit has resulted in continuing social ills such as violence, crime, addiction, joblessness, educational failure, poor physical and mental health and a sense of social inferiority. Those in positions of privilege have also suffered harm. While it can not be compared in scope and severity, aspects of these include racism, indifference, the normalisation of inequality, blindness and numbness towards need, and an innate feeling of superiority that makes normal human relationships almost impossible. These effects of the past on the present are considered in Chapter 3: The pain and outrage of racism, Chapter 4: Apartheid’s costs: education, opportunities, assets and wellbeing and Chapter 5: White privilege and responses to South Africa’s past. They are all stories that need to be heard on a journey towards restitution.

The second idea is that a broader understanding of restitution ─ beyond the legal usage, and beyond application only to land ─ is a helpful tool to bring about change. Along with widening the definition we also need new language and more categories beyond the labels of ‘victim’ and ‘perpetrator’ to talk about our roles in the past. Some of these new labels might include terms such as ‘beneficiary’ and ‘resister’, and might differentiate between an ‘architect’ or ‘implementer’ of injustice and of resistance to injustice, for instance. We may add new descriptions to ‘victim’, such as someone dishonoured by injustice, and explain the category ‘bystander’ by adding the more colloquial term ‘ostrich’. These terms may also serve to help us understand how roles become complicated over time, but show that we all have a part to play in a conversation about restitution: young and old, guilty and blameless, Black and White. This idea will be considered in Chapter 6: Restitution: A new conversation and Chapter 7: Locating yourself in the conversation.

Restitution has the potential to restore our humanity

The third idea is that restitution aims at restoring our humanity, or sense of personhood. Drawing on an African understanding, I describe personhood as including dignity, opportunity, belonging and memory, and so include symbolic, practical and financial acts and attitudes in a quest for restitution. Strategies for restoring personhood include restoring land and homes and ensuring a decent standard of living for those deliberately excluded from South Africa’s development as well as  enabling people to take advantage of available opportunities. An enormous array of ideas needs to be discussed and implemented. These ideas may include dialogues to remember past injustices; developing a shared vision of what it means to be a South African; implementing projects to promote physical and psychological flourishing; building friendships across former lines of hatred; transferring skills; mentoring across our usual divides; discussions about forgiveness; and disrupting the perpetuation of wealth passing from generation to generation through inheritance. These ideas will be covered in Chapter 8: Restoring our humanity and Chapter 9: Everyday actions for individuals and groups.

There is something for everyone to do in restitution

The final idea, is that when it comes to restitution, there is something for everyone to do: individuals and communities, governments and institutions. In order that we do not merely repeat the past, with one group dominating the other, the best way to decide on what actions should be taken is to decide together, in dialogue, with people different to us. So while government and legal programmes such as penalty payments, land redistribution, and affirmative action (acts of restitution with which we are most familiar) are important in bringing about social transformation after conflict and injustice, it is the participation of civil society, communities and individuals that are vital in fulfilling restitution’s wider aims. I call individual and communities’ involvement in restitution, social restitution, and contrast it to government-led or institutional restitution. While this final idea is to be found throughout the book, I summarise it in Chapter 10: Critical active social restitution and offer, in summary, ten criteria by which to measure and evaluate our efforts at social restitution.  These criteria are readily translatable into ten steps that groups of people could embark upon in a journey of restitution.

An extract from Another Country: Everyday social restitution (BestRed, 2016)

Theme by Anders Noren — Up ↑